Diamond Twill weaving is a go! 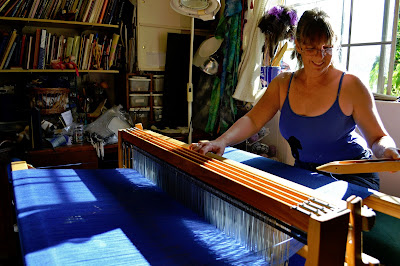 It is always a bit nerve wracking to throw the first pick of a weaving project. In this case, I spent about 15 hours getting the loom all warped up. Now, did I make any threading mistakes? Is the tension even? Are the threads spread out at the proper spacing? Do the colors work together? Deep breath. On your marks....get set.... 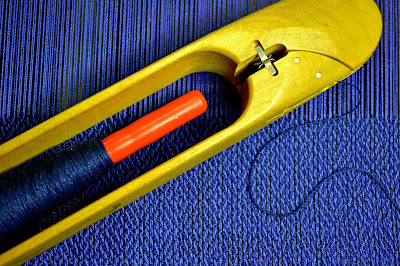 It worked!! And now, the reward for all that picky warping work. I get to crank the music, open the window, and dance on the loom. Here comes the fabric!
Posted by Melissa at 11:32 PM 6 comments: Links to this post

And the loom is warped!

When last I left you all in my warping process I was threading the heddles on my loom. This took awhile. Really. About 6 hours all told. Each thread needed to be pulled through its individual metal heddle, which will control when I raise up that thread during the weaving process. But I tell you what: I quickly found that I need to get my eyeglass prescription updated. The light helped, but I still needed to focus that closely. Yes, yes, I'll call the eye doctor soon. 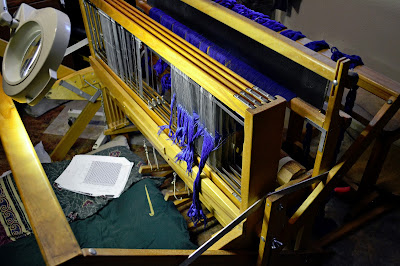 But eventually, I did manage to get all 1020 threads put in their place. 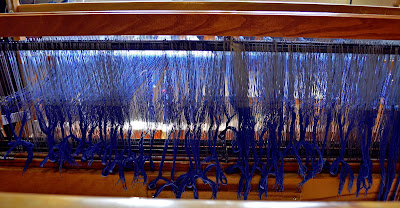 And then, I tied them on to the back apron rod. 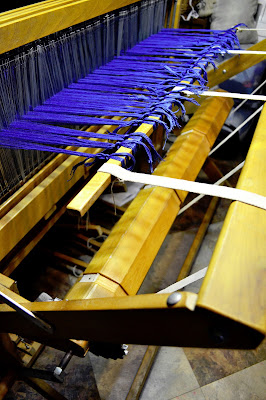 And with a friend's help cranked all 14 yards of thread onto the back beam, under nice even tension. It will wait there until I'm ready to use it. 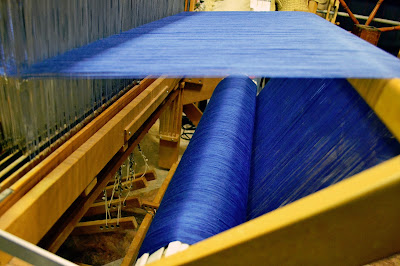 I've never had someone help me with the beaming process before, but I've heard it is easier so I thought I'd give it a try. I had Brian man the back beam, turning the crank and inserting sticks in between the layers of thread. I was around at the front of the loom, keeping the threads from tangling and evening out the tension. It only took us about an hour to beam on the warp, which I think is about half of what it would have taken me alone. So, cranking on the warp is in fact easier with two people. Thanks, Brian!

Now, I've finished up the rest of the fiddly warping bits this evening. With any luck, I can start actually weaving tomorrow. Yes, that is right. I'm 15 hours into this project, and now I can 'start' weaving. Folks don't realize that by the time you're throwing the shuttle back and forth, you're already half way done with the project, and all of the creative planning and figuring is already done. Now, if everything goes smoothly, I get to sit back and just enjoy the rhythm of the loom, watching the fabric finally form under my fingers.
Posted by Melissa at 2:22 AM 4 comments: Links to this post 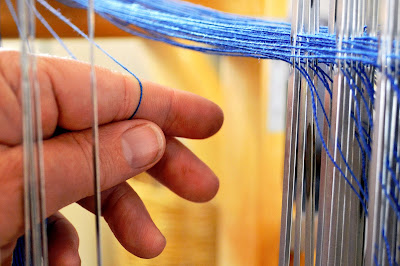 I'm threading heddles today. Each of the 1020 individual threads in this dress fabric project needs to be passed through a hole in its own metal heddle. This way I can raise up the threads during the weaving process. Only one problem...I only have 1000 heddles. I've ordered another 100 which should be here by the end of the week. Here's hoping they fit the loom. Otherwise, I'll have to adjust the project by taking 10 threads off of each side, and making the finished fabric a bit narrower. (Estimated time to thread heddles: 6 hours.)

(Glad I checked how many heddles I had before I started threading, so I could get the order in ahead of time!)
Posted by Melissa at 6:14 PM No comments: Links to this post

Ok, I've been up to my eyeballs with modeling for life drawing classes the past few weeks, but I've finally had the chance to get back into the studio to get cranking on the fabric weaving project I've got. My deadline is the end of the month, so I need to hop to it.

This week? I finished measuring out the 1020 threads, each 14 yards long. I chained them up to keep them organized, and moved them to the front beam of the loom. I temporarily wrapped them around the front beam, so I could work with them from there. 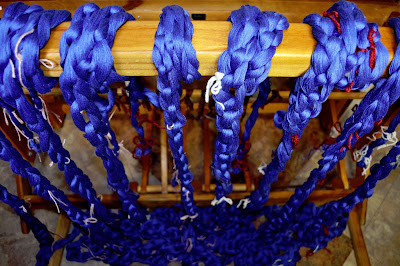 Someone mentioned that it looked kind of like Rapunzel had been here. We decided if that was the case, Rapunzel was a Smurf. And had eight sisters.

It made me giggle.

Today I took the next step of warping, and passed the threads through the reed to spread them out evenly. 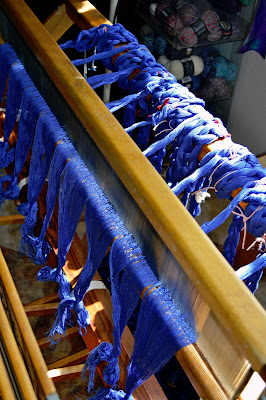 I want there to be 30 threads per inch of fabric. I have a reed that has 15 openings each inch, so I figured this would be a snap. Just put two threads in each slot, and I'm good to go. Except? I didn't check if my reed was wide enough for the fabric I had planned. Nope. Half an inch short. Luckily I checked that before I started threading!!

Instead, I pulled out my 12 dent reed (12 slots for each inch), and wandered around the internet to find the best way to still get 30 threads per inch. Yes, I could have done the math. But I'm lazy, and Google works. It turns out that alternating 2 threads per slot and 3 threads per slot does the trick. No problem!

Unless, of course, you are rocking out to Meatloaf songs and not paying attention to what you are doing. In that case, you forget to alternate one time. Which of course messes the pattern up. And crams a few threads too close together, which may or may not show up as a faint stripe in the finished fabric. Luckily, I caught that one only about 3 inches of threading further on. It took me about 20 minutes to fix the goof and  finagle each thread into the proper order, but it all looks correct now. Here's hoping!

Next up? Threading the heddles, so I can raise threads to create a pattern. But that will have to wait. I declare a weekend!
Posted by Melissa at 4:20 PM No comments: Links to this post