So, time to learn something new to me! I've been making socks with my antique sock knitting machine, and that led me to itching to want to dye my own sock yarn. I went hunting around the internet, and found a couple of inspirations. This blog entry (https://yarndesignersblog.wordpress.com/2013/04/19/no-mess-crock-pot-yarn-dyeing/) and this video on YouTube (https://www.youtube.com/watch?v=Hv25WIVdOik) both used a similar technique of sprinkling dry dye powder on hanks of yarn in the crock pot. That looked like a great way to get my feet wet (so to speak). I decided to go with Jacquard acid dyes for their light fastness and color selection, and made myself an order from Dharma Trading Company. 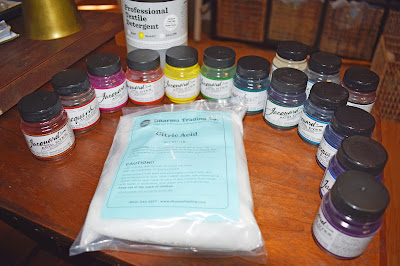 I went ahead and got a rainbow of colors, plus brown, black and gray. And, I decided to go with the citric acid crystals rather than just using vinegar, so my project wouldn't smell up my house. Then, I had to figure what yarn to use. My antique knitting machine really works well with the Serenity sock yarn from JoAnns, so I picked up some white skeins to start with. I have an antique clock reel that I rescued from a second hand store (it had been turned into a plastic flower planter, poor thing!), and used that to turn two skeins of yarn into one hank of yarn. Each skein is enough for one sock, and this way I could get matching socks from a dyed hank. Though, come to think of it, it might be fun to dye related but slightly different hanks, for the non-matching fraternal sock craze that is going on. Hmmm..... 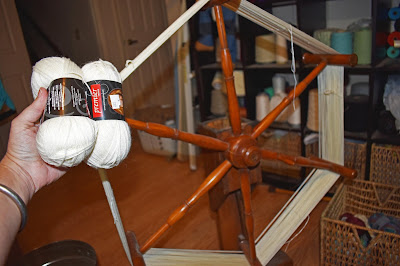 Then, more or less following the directions on the two sites, I got to playing in the color. I have three hanks of yarn in the crock pot tonight. The bottom skein started white, and used the figure 8 way of putting the yarn in the crock pot. (Twist the big loop once, so it looks like an 8, and then fold the two loops over onto themselves. Put that in the crock pot.) The second hank is also done in the figure 8 way of laying out the yarn, but it started purple. I wanted to see what it looked like to overdye another color. The top hank is just scrunched in one big circle, and started white. I've used purple, fire red, and brilliant blue dye colors, in approximately equal proportions around the ring. 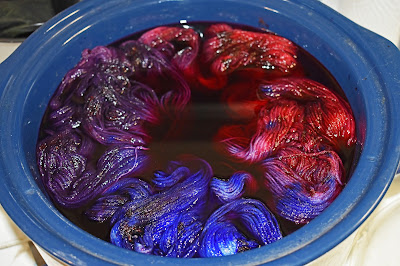 So...now it simmers over night. I put on high for the first hour, and then popped it down to low until I wake up tomorrow. I'm finding the biggest challenge so far is Not Messing With It. I want to poke at it, and that will just disturb the water and muddy the colors. But....I want to play!!!

Dream of color.
Posted by Melissa at 1:43 AM No comments: Links to this post