I should be packing for our trip, but I wanted to show you the wet-felted passport case I just finished up: 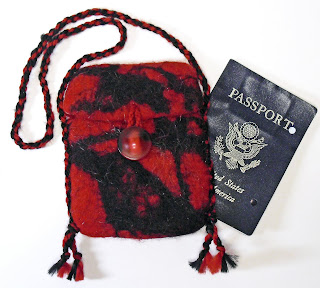 Didn't that turn out fun? It is flat and flexible, with a 20" shoulder strap. That makes it comfortable and secure tucked under the arm for travel. This one is a commission piece that I worked up for a friend, but I think I'm going to have to make some more of these. When I get back from vacation, that is. 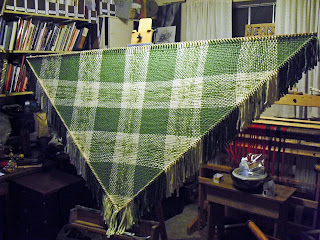 A friend of mine put in a request for one of my triangle loom shawls. She wanted a warm blanket weight, in earthy greens and white, in a yarn that had no wool in it. I hunted around for a bit, and came upon Joann's store brand, Sensations 'Sumptuous' yarn. The pegs on my loom are set rather far apart, so I was going for the bulkiest yarn I could get my hands on. This yarn bills itself as 'Super soft and bulky acrylic yarn', and they had the colors I wanted. They were on sale too! However, the store was sold out. The nice ladies kindly put in a special order for me. I asked for two skeins of green, one of variegated green, and bought the skein of white that they had on hand.

A few weeks later, my yarn came in. I trotted over to the store to pick it up...and noticed that the variegated green skein looked kind of puny. Sure enough, though the price was same, the yardage for variegated was less than for solid colors. I grumbled, and got another skein to be sure I had enough. Then I went home and started weaving.

The yarn was in fact soft to the touch, quite bulky, and kind of spongy. Lovely! But I soon found that it was really just bit too thick for easy weaving on my loom. And the bouncy spongy texture made it a bear to try to beat into place. It took some extra care and fiddling, but I eventually got the body of the shawl done. (I'm glad this wasn't my first attempt at weaving on a triloom, though! I might have given up on a fun hobby if this was my first impression.)

When I went to measure out the yarn for the fringe, I realized that I didn't have enough yarn left over from the weaving process. I looked...and sure enough, though the skeins look bigger than the skeins of yarn I usually use (Lion brand Homespun, or Wool-Ease), there is less yardage on each skein. I had to go back to Joann's and pick up another skein of white, and another of green. Luckily, they had them in stock this time. Tip to the wise: know how much you need before you start! Don't assume a skein is a skein is a skein.

Once I had enough materials, the fringing process went pretty easily. I usually double the fringe when I'm using Homespun yarn, but this yarn is thick enough that that wasn't necessary. The shawl is now off the loom, and waiting to go into the wash for wet finishing. And it is, in fact, a blanket weight fabric that is soft to the touch. This will definitely keep her shoulders warm on cool autumn nights!

However, I don't think I'll use this yarn on my loom again soon. The bulk and texture make for difficult weaving, and the relatively small yardage on each skein means I had to spend more in materials than I had intended.

I could see that this yarn would knit or crochet quickly into nice chunky scarves or lap robes, though, and they would feel great against the skin. If I take up those crafts, I'll revisit this yarn.
Posted by Melissa at 1:43 AM 7 comments: Links to this post

4th of July, and knitting on the circular sock machine 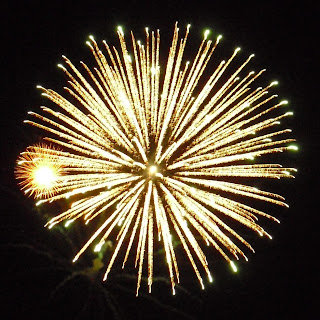 For those of you who live in the US, I hope you had a wonderful 4th of July celebration this past weekend! We had a lovely time here in Arizona. My family went to my folks' place for the afternoon and early evening, for brats and potato salad and jello and chips, with strawberry shortcake and icecream for dessert. They usually cook much more gourmet food, but for the 4th we went with classic picnic fare. Then we followed that up with a couple of hands of cards, killing time until it cooled off enough to go outside. When the sun went down, we headed on over to the ball park, and enjoyed live music and a great fireworks display. I love the 4th--it is one of the few times that the whole community comes together for a celebration. 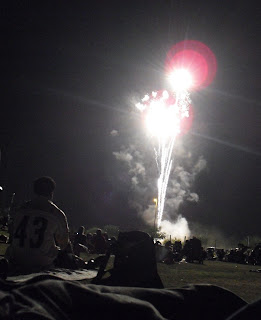 For the rest of the weekend, I've been cranking on my Creelman Brothers circular sock knitting machine. I've got four new pairs of socks up in the Etsy shop already. Three more pairs are currently on the drying rack, waiting for their turn in front of the camera. I'm using Regia 'Galaxy' sock yarn for the most part. I really love the swirl patterns that it is giving me! I bought enough for 12 pairs of socks when it was on sale several weeks ago, hoping that it would work in my machine. It knits beautifully! And at 75% superwash wool, 25% nylon, it makes hard wearing and machine washable socks.

My goal for the week is to keep on cranking away. I'd like to fill out the sock section in the Etsy shop before I head out for my upcoming road trip to Ontario. This weekend I'll be putting the shop in vacation mode for the rest of July. It will open again at the end of July/beginning of August. Around here, that is just in time for Back to School buying, so I'd like to have a selection of socks ready for that. I'll tell you what though, it seems very strange to be making wool school socks when it is over 100F outside!
Posted by Melissa at 1:28 AM 4 comments: Links to this post