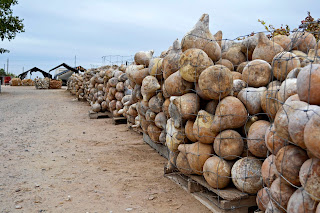 I've been taking a Textiles class at the local community college this semester. We've done felting, embroidery, ice dyeing, shibori, surface embellishment, and coiling as the sections. For our final project, the assignment is to make a map of some sort, using some of the techniques we've learned over the semester.

I was stumped. I thought for awhile that I'd make a fabric map of Snake Bay on Lake of the Woods, where I go for summer vacations. But, what I envisioned for that was going to take a lot of embroidery. And, I still really don't care for embroidery. Other techniques grab me much more. So, while I was working on my coiling project (bowl made of hand dyed wool yarn wrapped around clothes line)... 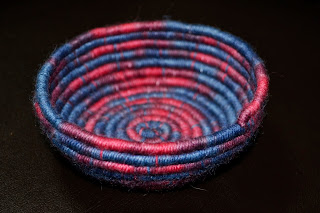 ...I decided I wanted to do something more three dimensional. And, maybe not hold myself to an actual place. Wouldn't it be fun to make something like a pirate's treasure map? And my brain was off and running.

So....take a gourd. Maybe ice dye it to make island ground colors? Felt around it in water colors. Cut it open. Coil around the top, to mark the entrance to the treasure cave. And then embroider on it to make the map leading to the island. I don't think that makes sense to anyone who is not in my head, but I can almost see this one. And I am kind of excited to give it a try.

Step one was a visit to Wuertz Gourd Farm, which you can see in the picture at the top of this post. http://www.wuertzfarm.com/ Seriously, if you can't find the gourd you're looking for there, you aren't trying. I have never seen so many gourds in one place! All sorted by type and size. So, I picked out two kettle gourds. One to work on, and one as a spare in case I screw up the first try. 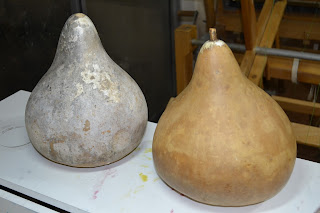 I could have paid extra for a gourd that already had the waxy coating cleaned off of it, but it is easy enough to do with some water, a copper scrubbie, and some elbow grease. You can see the difference that taking that coat off makes visually! 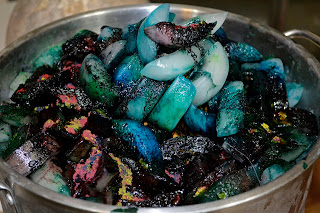 Then I did some mad scientist art experimentation, and tried to ice dye the gourd. I couldn't find anything on line about it, just that it was possible to use Procion powder dyes to dye gourds. I wrapped the gourd in towels soaked in soda ash water to prep it, then removed the towels, buried the gourd in ice, and sprinkled the dyes on the top. 24 hours later, I rinsed off the gourd. 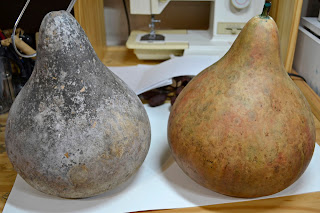 Hrm. I'd guess that I didn't find much on ice dyeing gourds because it doesn't work terribly well. Especially for the amount of pigment that went into the attempt. I'll keep ice dying for fabric, like in this class sample done with the same general technique: 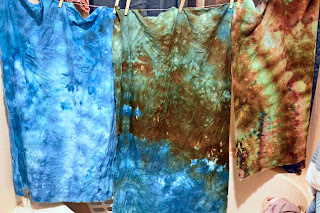 But, the dyes did leave some subtle reds and greens, and brought out the natural variations in the gourd. I can definitely work with that for this project. I just won't try it again. (Unless someone out there has ice dyed gourds more successfully? I'd love to hear your technique!!)

Tomorrow in class, I'll attempt to felt over the gourd. I've tried this once before, and found that the felting process makes the gourd shell very delicate and apt to tear when it gets soaked. But I had already opened and cleaned that gourd, so the water was getting in to the shell and soaking from both sides. I'm hoping to avoid that this time by waiting to carve the gourd open until after the felting process, and after everything has dried back out. I've cracked several gourds in the cleaning process, so this is a risk also. Luckily, I have that spare gourd for when I screw this one up.

Hand dyed sock yarn, and a shot of me with my sweeties 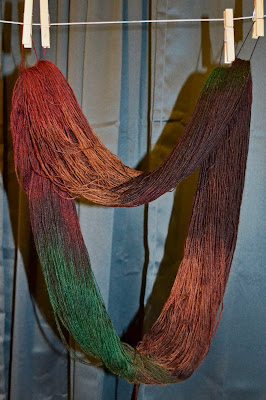 I had a request for a couple of pairs of socks, cranked out on my antique sock knitting machine. The blues that she wanted were easy to find in commercial sock yarn. However, she also wanted some rich earth tones with touches of brown and green. And wow, the easily available varieties of sock yarn have diminished since I started making socks. However, I did have a skein of white wool/nylon that I had been meaning to experiment with. And I had some Procion dyes. Now, those are really meant for cellulose fibers rather than protein fibers, but if you swap out the soda ash in the soak for vinegar, it works pretty well. I liked the colors that I got.

The remaining question was, was this yarn going to work in my finicky machine? It doesn't like yarn that is too thick, and commercial sock yarn is kind of a hit or miss as to whether or not it will flow through the machine. Luckily? This works! 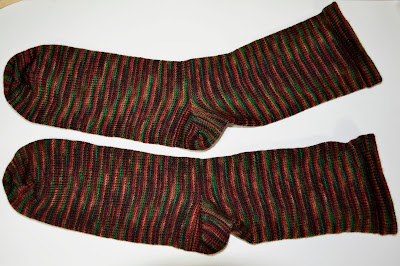 I still need to run the resulting pair of socks through the washing machine to wet finish them, but if that turns out well I will definitely be ordering more of this yarn. And, experimenting with a few different methods of dyeing sock yarn. I'm seeing a new obsession....er, product line....in my future!

Oh...and since I know some of you were curious after my post of a couple days ago, here is a shot of me with my two sweeties. 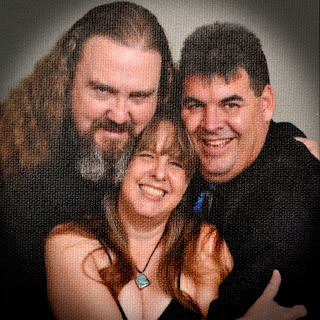 Both of my kids and my son-in-law were in town last month, so we got our family portrait done. While we were there anyway, I grabbed a shot of the three of us just for fun. The photographer was a little puzzled, but she rolled with it very nicely.

And now, I really ought to put the yarn away and get some sleep. It is 3:30 in the morning. But I am wide awake, and I want to play in the color some more!!
Posted by Melissa at 2:32 AM No comments: Links to this post 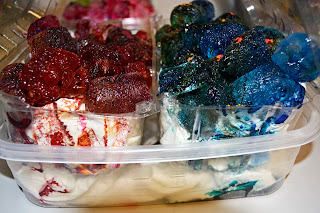 I'm taking a Textiles class at the local community college, and last week we tackled ice dyeing. I've done a variety of dyeing over the years, but I had missed this one. From my class notes:

Ice dyeing: Soak cotton fabric in soda ash water until saturated. (1 c soda ash to 1 gal water). Wring out your fabric, and then put it in a slotted plastic container like you get strawberries in at the grocery store. Put in the container in another plastic container to catch the drips. Cover your fabric with ice. Sprinkle small amounts of Procion dye onto the ice. Wait for the ice to melt, and carry the dye down in unpredictable ways onto the fabric. Let this all sit for 24 hours. Rinse out your fabric until the water runs clear, then wash in either Dawn or Synthropol.

I'm not entirely pleased with how my initial samples turned out, so I'm trying it again this week. But the class had their samples up on the board today, and most of them were quite gorgeous! I think I need to experiment more. (The pink and green vertical rectangles in the bottom right are mine. Boring. Do it again.) 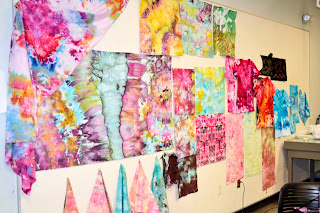 Posted by Melissa at 1:59 AM 2 comments: Links to this post

Email ThisBlogThis!Share to TwitterShare to FacebookShare to Pinterest
Labels: dyeing

A personal reaction to current events 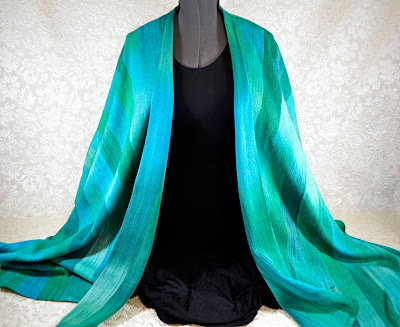 So, the hand dyed ruanas turned out quite well. I'm pleased. One of the three is already off to its new home, and the other two have been listed in the Etsy shop. (https://www.etsy.com/shop/tangibledaydreams?show_panel=true) I've already got yarn in for the next batch, so I'll be started on those right after I finish a commission for a couple pairs of socks.

Wow, is that a boring entry.

Now...about this blog. As you can see, I've been pretty spotty in updating it. The thing is, I've made this into almost exclusively a crafting blog, with pictures of projects and how-to's when I have something new to share. And, I'm going to keep doing those. But... I'm bored with sharing only this professional side of my life here. I've been keeping this pretty focused, and in so doing, I'm losing my actual personality and voice here. I've decided that I need to give myself permission to blather along about the other neat things in my life too, even if they're not directly art related. Things like, my husband has a band. My other husband has a neat trip to Italy coming up. Oh yes...the fact that I have two husbands (only one with paperwork), and am polyamorous. I've danced around that here, and I'm not sure entirely why. Fear of offending? Fear of being visible? Fear of driving off clients if they knew who I was? Well, that is cowardly.

And yet... I'm rocked by the results of the US election last night. Was that just last night? It seems like forever already. A man that I see as encouraging intolerance, hate, bigotry, misogyny...he was elected. And already I seem rumblings that some of his followers have taken that fact as permission to act on their baser sides. We're better than that, folks.

But I get it, in some ways. The world has been changing. A black president. Gays marrying. A woman running for president. The job market has been morphing, and those bedrocks of an American Dream 'normal' life are shifting. Folks want normal again. They want things to go back to some idealized past, where hard work and following the rules could give you and your family a place to thrive and belong, among people who were like you and had the same ideals.

Normal. Where I grew up, white was normal. Going to church on Sunday was normal. Middle class was normal. Mom and Dad and 2.5 kids and a minivan and a dog was normal. Straight was definitely normal. When I got out into the world and found that folks who didn't look like me weren't actually scary thugs, they were just people? That was an eye opener. It took awhile of deliberately pushing my comfort zones before I could see other faiths, other races, other relationship choices, etc...as normal. It took gradually being exposed to different, and different becoming part of my everyday landscape. And since then, I've read viewpoints from some of my classmates, who didn't fit the suburban dream normal mode, and how difficult it was for them. I was blind.

Normal. So, in recent years, I've chosen to be out of the closet about the fact that I love more than one person, and that we've chosen to bind our lives together the three of us. I've found that when people see me and my family and get to know us, it gradually gets to be a part of 'normal' to them. Their world widens a little bit, too. It doesn't match up to so much of what other people go through, but it is my own bit of different to share.

But I've been so 'professional' minded here, that I locked away whole swaths of my life. And, that has felt restrictive. So, I think from here on out, this blog needs to widen up a bit. I'm going to be a little less afraid of offending by letting people see who I am, what I do, and who I love. My life feels normal to me. But, I think I have a need to speak up a bit more than I have been doing, and share more than the surface here.